If You Find Crew Medical Insurance a Headache, Here’s the Cure 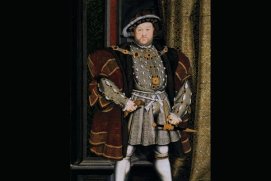 Henry VIII loved to gorge on roasted chicken legs and throw them to the hungry hounds after just a couple of bites, that, and befuddle, bother or behead his six wives.
But one of the most important parts of his legacy was the building of a powerful Royal Navy. With both the Scottish and the French constantly threatening to attack, as soon as he was crowned Henry wasted no time in commissioning new ships.

The Mary Rose was ordered to be built in 1509, the same year he came to the throne. Something of a latter-day superyacht complete with cannons, contrary to popular belief, the Mary Rose did not sink with nearly all hands on its maiden voyage, it served the Navy well for 34 years.

To fund his obsession to build a powerful fleet, Henry had an ‘off-the-shelf’ solution to dissolve all the wealthy monasteries and take their cash and antiquities. When he died in 1547, the Royal fleet had more than 40 ships, the monasteries were near destitute, the land near stripped of all oak trees, but Britain possessed one of the most powerful navies in the world.
It’s also thanks to Henry VIII we have the catchy sounding The Judgment of the Sea, of Masters, of Mariners, and Merchants, And All Their Doings, a weighty tome based on the Rolls of Oleron.

Henry didn’t only build the Navy. A well-educated and intellectual man, in 1518 he established the Royal College of Physicians in order to ‘withstand the attempts of those wicked men who shall profess medicine more for the sake of their avarice than from the assurance of any good conscience’.

That said, life aboard a Naval warship of the time was akin to being in prison with the added danger of being either cannonballed, drowned or killed by primitive medical care. Physicians aboard battleships served as doctor, dentist and pharmacist, rolled into one. Among objects found on the Mary Rose were knives for amputations, bowls for blood-letting and a rudimentary syringe, used, of course, on many men without sterilisation.

These days you don’t need a king’s ransom to fully cover yourself or your crew from the many hazards at sea, or to protect yourself from the ‘avarice’ of scarily expensive hospitals should illness befall you overseas.

Moore Stephens Crew Benefits finds solutions that are anything but ‘off-the-shelf.’ We’re small enough to provide a tailored service, but well-connected enough to know about the best MLC compliant deals for you.
Whether you’re looking for Individual or Group Cover, at MSCB you’ll always work with just one single point of contact who takes time to listen and understand your needs. To find out more, contact us here and we’ll help sort out your maritime insurance needs.